Some of you who know me personally know that I have had my chest issues. Not medical issues, but social issues. I once got into some trouble because of my boobs (and yes I am using the slang term.) Some people don’t like me to talk about it, but I think this specific issue is significant because this social issue also applies to fictional characters. It also correlates the relationship between authors and their characters.  It is a good to know tidbit. In this case it is Bunny Celia, the female protagonist in the Rude Boy USA Trilogy.

These games took many months to visualize including much of the artwork involved. I wanted each character to truly reflect what their personalities were. Bunny Celia, is a sexy character, otherwise she would not have been a Playboy waitress in the story.

Many of her renderings generously show her curves which does include her top half. Like may women her character embraces her cleavage. While cleavage has become mostly socially acceptable when it comes to marketing many things, Google Play did not share the same sentiment. (By the way, this is being shared as cool story, not a critical analysis of Google Play!)

You may have seen many of the advertisements for the game already, including these:

There is Celie, smiling sparkling and badass. Her proportions are accurate which many people may see it and frankly get turned on in real life. That’s how I wanted my characters to be.

Before publishing, I received this very nice rejection letter from Google Play.

This was the graphic in question: The start menu of Rude Boy USA Slots. 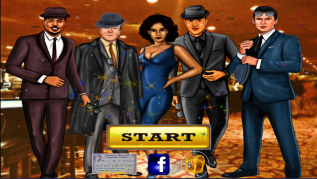 To paraphrase it, it basically says “Too much boobage.”

My first thoughts were “Wow. Celie and I have something real life in common now.” I laughed and changed the graphics without complaint because that’s how business runs.

Many people still see female “boobs” as sexual objects and not as something that feeds babies, even in paper and ink, which is unfortunate.

Many authors may put some aspects of their own personality into their characters. At first, I did not want people to think this way of my female protagonist. However, over time and reading things after publishing, I realized that perhaps in another fantasy world Celia was me. (I wish I did look like her though.)