So, it is almost that time for the release of the final book in the Rude Boy USA trilogy. The Tide is High is almost here. I love the richness of the navy blue here. I will update my available books page in a couple of weeks to show the full description of the book. I think you will love this. It is a fitting end to the Rude Boy USA series.

This is what else I have in store for you.

August 23rd, The Tide is High will be released digitally (tentative date.)

The rollout will be different. Barnes and Noble, kobo and iBooks will get the digital edition  first this time. 😀 It will be ready for Amazon in both kindle and print in September.  This is due to my decision of not enrolling the book in  Kindle Unlimited and giving readers time to catch up on Rude Boy USA and BunnyWine before the release. That means that subscribers will have to pay 2.99 for the kindle version of the book when it arrives. I still don’t think that is a bad deal at all. By the way Kindle Unlimited ends for Rude Boy USA on July 28th! It ends for BunnyWine on August 11th. If you are a subscriber, take advantage. After those dates Rude Boy USA will be available on iBooks, Smashwords and Barnes and Noble for nook on August 2nd. BunnyWine for the same retailers on August 12th.

Here is the other option.

On September 6th, the entire trilogy will be released as one kindle/nook file.  The Rude Boy USA Trilogy will have two versions.  One version for Smashwords (wide distribution, different formatting)  and the other exclusively for Amazon. I will release the Amazon launch date later. Keep a lookout on this blog.

The Smashwords edition will have a few extras like a Q&A interview.

I have a survey on the cover design going right now. I am still undecided on the covers I will use for the Amazon version of the Trilogy.

The Smashwords version has already been decided. Beautiful isn’t it? A leather book cover design. I haven’t seen that before.

These are the other two options for the Amazon kindle version. If you have favorites just leave me a note. Men seem to like the black and gold lettering. Women seem to like the silver gradient. It is still a tossup at this point. The winner will have the amazon title on the cover, just like the Smashwords version. 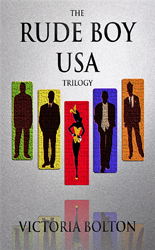 Once the launch for Tide is High and The Rude Boy USA Trilogy is completed, I will be hard at work on the re-edit of Looking for Mr. Potential. I will do another post for that one on a later date.